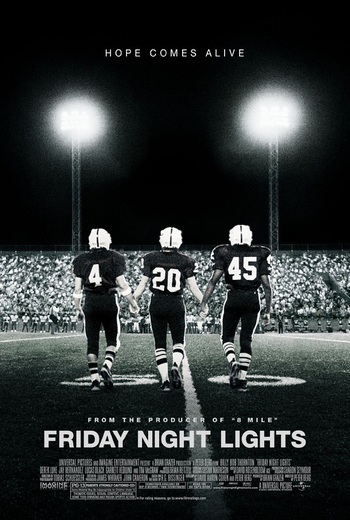 Friday Night Lights is a 2004 film based on the book Friday Night Lights: A Town, a Team, a Dream by H. G. Bissinger. The film was a critical and financial success, and a television series of the same name followed in 2006. The film is directed by Peter Berg and stars Billy Bob Thornton, Connie Britton, and Tim McGraw. The football players are portrayed by Lucas Black, Derek Luke, Jay Hernandez, Lee Thompson Young, and Garrett Hedlund.

The film is set in Odessa, Texas, and chronicles the 1988 season of the Permian High School Panthers. The film deals with the team's importance to the town and the underlying social and economic issues faced by the players, townspeople, and coaches on a daily basis. The film won an 2005 ESPY award for Best Sports Movie, and Entertainment Weekly placed the film at #37 on its 2006 list

of the Best 50 High School Movies.