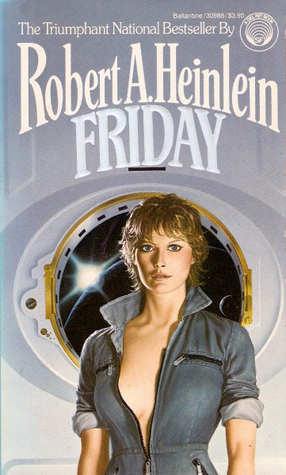 My mother was a test tube
My father was a knife...
Advertisement:

Friday is a novel by Robert A. Heinlein about an artificial human called Friday "Jones", a.k.a. "Marjorie Baldwin". When the novel starts, she is working as a spy/courier for a mysterious organization based in a nation-state centered around Chicago. It gets messy; she reflexively kills someone who might have been a tail and evades other pursuit that involves blowing up an entire hotel she just left. She finally reaches her home base — and immediately gets captured by enemy agents and tortured for the information she was carrying, which is not in her head. After finally being freed from that escapade, it is near time for her to consider retiring.

So she flies to her home in New Zealand, where she is one of about eight spouses in a group marriage. She isn't there often, but she wanted a place to call home. One of her adoptive children scandalizes the family by starting a relation with a minority. Friday tries to make it better by admitting that she's an artificial human, since these are also prejudiced against. Then she finds out, the hard way, that being a married artificial human in New Zealand is illegal, and virtually the next thing she knows, she's thrown out of the group marriage, crashing with a handsome Quebecois airline/spacecraft pilot she met and his significant others. And that's when a massive wave of terrorist attacks, "Red Thursday", plunges the world into chaos.

From there, Friday has to survive the chaos of the patchwork of states on the North American continent in order to stay free, make contact with her organization, and figure out what's happening. This proves extremely difficult...

In the Canon Welding, this would come sometime after The Moon Is a Harsh Mistress in that book's timeline, but the connection is not necessary. It is a sequel to an earlier book, Gulf.