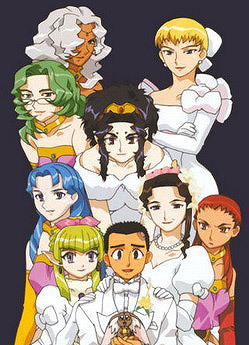 So, wait, did he hook up with the cat thing too?note Word of God says yes.

In Love Triangles and more complicated situations, selecting just one suitor can prove to be a toughie. After all, the main character usually finds him/herself in this predicament because he/she likes all of the love interests to a degree and doesn't want to break anyone's heart or make anyone leave. Even if he/she likes only one in particular, there's little guarantee that the rest will be willing to accept their choice, especially in long-running harem series. This often happens when the love polygon devolves into True Companions and infatuations become close friendships instead.

So if First Girl Wins, Last Girl Wins, and/or Cleaning Up Romantic Loose Ends clearly aren't where the plot is going, there's another way to resolve the situation: Instead of choosing one Love Interest, the protagonist simply marries them all and they all live as one large family.

The happiness of those involved depends on where on the Sliding Scale of Idealism Versus Cynicism the series is; the only way (excluding large amounts of Shadow Clone abuse) this kind of ending will not end in a perpetual warzone of a Dysfunctional Family with an emotionally-dead Henpecked Husband (Tenchi Muyo! GXP) or a bloodbath within the year (School Days) is if the various spouses/partners in question are also close friends who love each other like siblings (or something else).

Some H Games will reward the player for getting a happy ending with every girl by making it possible to get an ending where they get all the girls.

May require Exotic Extended Marriage if the marriage is literal. In Real Life, such a thing is called polygamy. Which is illegal in most of the world.

Alternative Title(s): Marrying Them All, Polygamy Is The Best Solution, Harem Ending