Visual Novel / Under the Moon 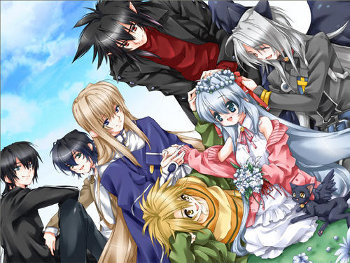 Under the Moon is an 18+ otome game released for Windows; possibly the best known of its sub-genre. It is the second installment in a trilogy that also includes Love Drops and Ijiwaru My Master. With art by Toujou Sakana (also known for Case Closed yaoi fanart), this game spawned a fan disk and a non-explicit PS2 port.
Advertisement:

The heroine of Under the Moon (default name: Ashe) is the daughter of the king of the demon world. All is not well in her father's domain, however — his power is fading and a succession crisis is brewing. The royal castle comes under attack and Ashe flees with her cait sith familiar (who can turn into a winged Bishōnen catboy) and ends up getting transported to the human world. There, Ashe soon discovers that her magical powers have vanished. (Though they weren't much to speak of in the first place.)

In no time at all, Ashe and Kyle happen across Leni and Seizh, twin devil brothers with vast magical powers who have been appointed as potential successors to Ashe's father. Neither brother expresses interest in leaving their new home in the human world to take the throne, but they agree to harbor Ashe on account of an ongoing "demon hunt". Angels have declared open season on devils in the human world, leaving Ashe not only unable to defend herself, but unable to go home. Ashamed of her powerlessness, Ashe takes it upon herself to convince Leni or Seizh to become the new demon king.

Being a visual novel, Under the Moon naturally has multiple endings, the routes for which are generally grouped into two types: "pure love" and "love/hate". Pure love is just what it sounds like. The "love/hate" routes are rather controversial for fetishizing sexual coercion and domination, and the love interests become bastard boyfriends and yanderes.