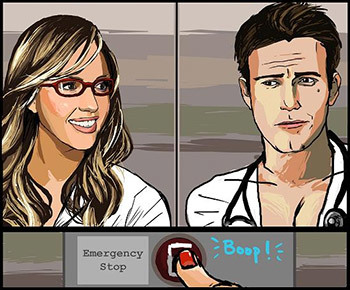 Jackie's in the elevator (whoa)
Lingerie, second floor (whoa, yeah)
She said, "Can I see you later (whoa)
And love you just a little more?" (whoa, yeah)
I'm kinda hopin' we get stuck
Nobody gets out alive
She said, "I'll show you how to fax in the mailroom, honey
And have you home by five"
— Aerosmith, "Love in an Elevator"
Advertisement:

What better thing for two characters bounding with Unresolved Sexual Tension to do when they get in an elevator together? Make out until the doors open, of course — which could be a while if the elevator gets stuck...

Sometimes preceded by an Uncomfortable Elevator Moment. If it goes further, it could cross over with Making Love in All the Wrong Places. Compare Born in an Elevator.

Do not confuse with an elevator plummeting to the bottom of the shaft, or an elevator whose destination is much further down than anyone would want to go. See Elevator Conference for the non-romantic version of this trope.