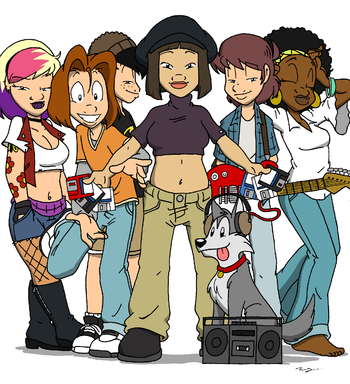 "It's the 90s, do a lot of coke and vote for Bill Clinton." note Characters from left to right: Jocelyn, Aaron, Steve, Michelle, Joel, and Kendra. Special thanks to Jesse for the specialized image.
Nineteen-Ninety-Something is a webcomic by Jesse J. Barboza, created as a snark-filled love letter to the 1990s and serves as a reboot of Forever 16, which was also created by Barboza.
Advertisement:

The series focuses on Joel Maxwell, a high school student with alt-rock aspirations and a natural compulsion to sarcastically strike back at every dumb thing he sees or hears. Naturally, he's the odd one out in his family, which consists of his moral guardian mother Tina, his disinterested worker drone father William, and his shallow trend-obsessed younger sister Katy.

His friends include Michelle, his girlfriend and fellow gamer; Aaron, a would-be womanizer and the lead singer of his band Westworld; Jocelyn, a bisexual punk-lover who delights in discomforting the uptight Moral Guardians at school and at home; Steve, a laid-back artist and the group's chief Deadpan Snarker; and Kendra, a more introverted artist with dreams of creating the next great cartoon.

In keeping with the 1990s backdrop, the strip not only references popular culture and current events of the time, but is drawn in the style of a '90s newspaper strip like Calvin and Hobbes or FoxTrot, both of which Barboza cites as major creative influences.

was released and is currently still ongoing. Barboza himself has stated

that the reboot is his attempt at properly addressing the criticism he faced when writing the original NNS.