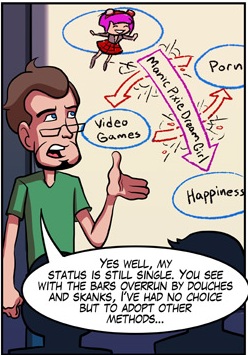 The life of a troper.
Advertisement:

by Jeremy Vinar and Mike Fahmie is a webcomic about video games. It occasionally strays into Real Life issues.

Strips tend to fall into two categories: The two main characters discussing a topic, or, as is typical of gaming webcomics, parodies of games, their mechanics, and their plots.

This comic provides examples of (or parodies):