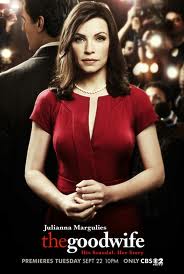 Alicia Florrick has a bit of a problem on her hands. Her husband was the former State’s Attorney of Cook County, Illinois, until he got caught being Eliot Spitzer/Bill Clinton and resigned. Then he got sent to prison for corruption.

A trained lawyer, she returns to practice at the law firm of Lockhart/Gardner, run by Diane Lockhart, her haughty mentor of sorts, and Will Gardner, her former law school classmate (and potentially more). Alicia begins running the pro bono cases, but of course, she’s a defense lawyer and all the prosecutors know her—including the new State’s Attorney, who may have shopped her husband to the authorities.

Meanwhile, her husband Peter is trying to clear his name and potentially return to politics. But he needs his ‘good wife’ by his side, and she’s not sure whether she wants to be with him anymore.

It had a South Korean remake of the same title that aired in 2016 for one season on tvN.

A Japanese remake of the same title has aired in January 2019 on TBS.