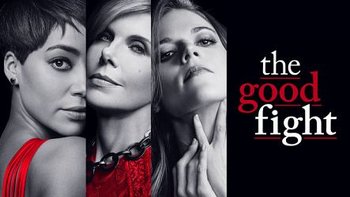 The Good Fight is a live-action TV series on CBS All Access, that premiered February 19, 2017. It is an aftershow of The Good Wife and the first original scripted series on the platform (due to Star Trek: Discovery being delayed). Like its parent show, it is produced by Scott Free Productions.

The series picks up a year after the finale of The Good Wife, when Diane Lockhart (Christine Baranski) is forced out of Lockhart, Decker, Gussman, Lee, Lyman, Gilbert-Lurie, Kagan, Tannebaum, & Associates after a Ponzi scheme wipes out her savings and destroys the reputation of her goddaughter Maia Rindell (Rose Leslie). The pair join Alicia Florrick's former partner Lucca Quinn (Cush Jumbo) at her new firm and try to rebuild their careers.

The series premiere aired on the CBS broadcast network and the remaining nine episodes were exclusive to All-Access. So far four seasons have aired, with the fifth ongoing and a sixth on the way.