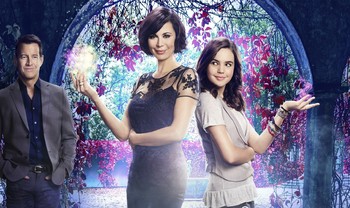 "Knowing how to share your gifts with the world is as important as recognizing what gifts you have to share."
Cassie: Oh, thirteen gets such a bad reputation but it's actually been a very lucky number for me.
Sam: You have the magic touch!
Cassie: Some people say I do.
— "Over Again"
Advertisement:

Good Witch is a pseudo-magical drama series that has been a staple of the Hallmark Channel from 2015 to 2021, lasting seven seasons and five two-hour specials. It follows the continuity of a series of Hallmark TV movies called The Good Witch that aired from 2008 to 2014.

Cassie Nightingale (played by Catherine Bell) is a very good-natured and helpful woman with mysterious intuitive powers, seemingly passed down to her through the Merriwick family line. She was an adventurer in the past, having traversed the globe and experienced just about every world culture and landmark that is worth seeing. Now she makes her home in the small town of Middleton, which is where the origin of the Merriwick family began. She runs the Grey House Bed and Breakfast, where she lives with her daughter Grace and Grace's grandfather George, who acts as the building's handyman. She is also the proprietor of a small shop in town called the Bell, Book and Candle. At the start of the series, Cassie has recently lost her husband Jake, who was Middleton's police chief before his passing.

The first episode also introduces Dr. Sam Radford, who has just moved to Middleton from New York City with his son Nick to be the town doctor and to get Nick away from a troublesome history in the big city. The Radfords move into the house next door to Grey House, and Sam and Cassie strike up an instant friendship despite their philosophical differences.

Other principal cast members include Stephanie Borden, the owner of the Bistro Cafe in town, Martha Tinsdale, the boisterous mayor of Middleton, and Abigail Pershing, Cassie's cousin and fellow possessor of Merriwick magic.