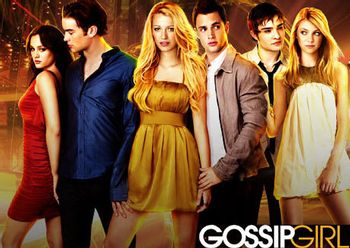 "There's nothing Gossip Girl likes more than a good catfight and this could be a classic."
Advertisement:

Gossip Girl is a Prime Time Soap based on the book series of the same name by Cecily von Ziegesar, adapted for television by Josh Schwartz (The O.C., Chuck) and Stephanie Savage.

Gossip Girl originally ran on The CW from 2007 to 2012, while a continuation and soft reboot sequel series of the series premiered on HBO Max in 2021.