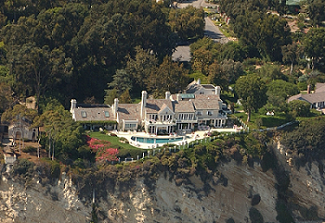 Barbra Streisand doesn't want you to see this picture. Well done, Barb!
If it becomes known that someone of power, fame, or influence is using strong measures to attempt to suppress a piece of information or a work, then many people will want to know what it is even if they never cared before.
Advertisement:

Something horribly embarrassing or personal about you has been released — anything from a sex tape, to an unflattering photograph, to the nickname you had when you were younger — and you want to keep it out of the public eye. So you do whatever it takes to make it go away: lawsuits, cease-and-desist orders, DMCA takedowns, whatever you have at hand. But it backfires: the efforts to censor the information become public, and people who would otherwise be uninterested are now dying to know what all the commotion is about. Whatever you were trying to remove from the Internet gets mirrored and copied to hundreds of other sites; the sex tape goes viral; the childhood nickname becomes national talk show fodder; the unflattering picture ends up in the newspaper. In other words, your fears that everyone would see the dirt on you is the very thing that caused everyone to look at it, and the harder you try to fight it, the more popular it becomes — and you learned the hard way that you probably should've ignored it and acted like it was no big deal.

Blogger Mike Masnick of Techdirt coined the phrase back in 2003 when American singer Barbra Streisand tried to suppress a photograph of her house, incidentally taken for a geological study on California's coastline, by unsuccessfully attempting to sue the photographer and force him to take the image off of his website. The public at large found out about this photo specifically because Streisand filed the lawsuit, leading to the photo becoming far more well-known than if she had done nothing at all, as the house was one of many in the study and in no way labelled as hers. Said image is the one at the top of this page.

This trope existed before the Internet was even a gleam in DARPA's eye, but since the spread of information is much faster, easier, and more difficult to prevent across the Internet than through other means, it is far more widespread and effective now.

Psychologists have done studies and found that the subjects' desire for any kind of material increased when they were told that it was censored — the old Forbidden Fruit principle in action. Perhaps any authority considering the use of censorship should worry that this move might be counterproductive if it just gets people interested in the censored material. "Banned in Boston" was once a badge of dubious honor for books, much like R-ratings on movies are for kids.

There's a general principle here that almost everyone learns back in childhood: when someone looks like they're hiding something, they probably are, and it's probably something interesting. The only way to really keep something hidden is to have nobody look for it in the first place. Of course, acting too casually often sparks the same reaction.

Not to be confused with No Such Thing as Bad Publicity, which is very similar, but occurs when Moral Guardians attack something and draw more attention to it. This is basically that but without the Moral Guardians.

A form of Revealing Cover-Up; also a specific form of Hoist by His Own Petard. Usually a Hydra Problem as well. Sometimes related to Clumsy Copyright Censorship and, more rarely, Fanwork Ban. Will lead to an Open Secret. See also Internet Counterattack. Compare to Thought-Aversion Failure (telling someone to not think about something will lead to them thinking about it). Basically opposite to Forced Meme, where the individual or company tries to make something as popular as possible and fails in much the same way for much the same reasons. Totally Radical can be seen as an inversion: a figure of authority attempts to embrace something, in extreme cases causing people to lose interest in it because the "official" endorsement is seen as proof that it has lost whatever originally made it interesting. People who avert this Just Ignore It.

This page alone is a meta-example since its entire purpose is to catalog the instances of the effect.

The Trope Namer
While this effect has been around for a very long time, the trope is named for American singer Barbra Streisand, who filed a lawsuit attempting to suppress a photograph taken of her house in 2003. The resulting attention brought to the photo because of this lawsuit named the effect in the public consciousness at large (and thus, this trope).

The photo in question was taken by Kenneth Adelman, as part of the California Coastal Records Project

, a government-commissioned photographic study of the entire coastline of the state of California that was explicitly for geological study. Helicopter photos were taken of the coast, with one photo captured every 500 feet. At the time, with Google Earth still in its infancy as a private subscription service, the record was a rather unique collection of images.

The next part is where Streisand took issue.

Adelman took more than twelve thousand photos for the geological study. One of these twelve thousand photos just so happened to capture Barbra Streisand's house, since it overlooked the California coastline. The picture wasn't identified as Streisand's house in any form, but Streisand sued Adelman anyway for violation of privacy. At this point, the Internet imp of the perverse was roused, and now everyone wanted to see the photo that Streisand didn't want them to see. After all, if Streisand lawyered up because of an image, that image must be something worth suing over, right? But when it was revealed that the offending photo was just an innocuous picture of her house — far from anything that could be called scandalous — news of the photo's existence spread far and wide, with others mirroring it onto multiple websites as a Take That! towards Streisand.note As a matter of historical note: before the public was made aware of the lawsuit, the image of Streisand's house had been downloaded only six times, and two of those downloads were by Streisand and her attorneys. After the suit was brought to the public's attention, the image was downloaded over four hundred thousand times in just the following month.

The way that Streisand shot herself in the foot cannot be overstated enough. The study was a mundane project that was only of interest to geologists, who neither knew nor cared about who owned the houses in the pictures they were studying, as it wasn't important to their findings. Adelman had not identified the house in the photo as Streisand's — in fact, he hadn't identified anyone's houses in the thousands of pictures he took, since he didn't know who the houses belonged to, either. The only way the public at large found out that the house in the photo was Streisand's was the lawsuit Streisand herself had filed that was specifically designed to prevent that information from getting out. Streisand making a big fuss over an inoffensive photograph of her house being in a mundane scientific study made it so that the greater public now knew where she lived, what her house looked like, and that she was acting like a foolish Prima Donna about the whole situation.

Basically, had Streisand kept quiet about the photo of her house, nobody would've ever known about it. But specifically because she didn't, the information about her house spread further than it ever would have if she'd done nothing at all.

Ultimately, Streisand lost her lawsuit against Adelman, and was required to pay the legal fees for both sides, which totaled over $150,000. The website detailing all of the pictures from the coastal study is still up, with Image 3850 still there

, now identified as Streisand's house. The website also has an archive