Series / Lie to Me 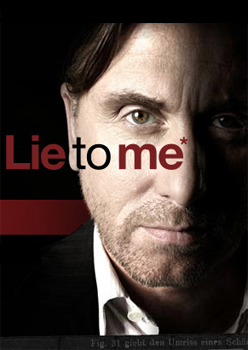 You're just telling porkies, aren't ya?
Cal: But a scientist's job is to verify, right?
Emily: You never trust anyone, do you? You know, that's why you'll always be alone.
—"Exposed"
Advertisement:

- and body language. The pioneer of this field, he operates his own business, working with federal and private clients to solve criminal and civil cases. A case of Truth in Television (well, somewhat), as the show is based on the science of Paul Ekman.

Lightman is joined by a team of three other analysts. Dr. Gillian Foster (Kelli Williams) is Lightman's close friend and the other senior staff member. She usually heads up another investigation while Lightman is busy on a separate case. Ria Torres (Monica Raymund) is a "natural" deception-detector. Lightman found her as a security agent at the airport. Rounding out the band is Eli Loker (Brendan Hines), an utterly shameless flirt committed to 100% honestynote His radical honesty disappears quickly in season 1. Lightman's precocious teenage daughter Emily Lightman (Hayley McFarland) and his ex-wife Zoe Landau (Jennifer Beals) are part of the cast as well.

The usual format of the show follows the team around as they pursue two different cases, typically one criminal and one brought to them by a private client. Though their research into microexpressions can't be used in court as evidence, it provides a start for prosecutors and companies in ferreting out the truth.

It seems similar on the surface to The Mentalist: a smart guy that can tell if you're lying, and who's fond of the Batman Gambit, works to solve crimes. There's the wild-card male main character with a tendency to antagonize adversaries and not let others in on his schemes, his Unresolved Sexual Tension with his more rational female second, conflicts with authority like the FBI, and so on. Some of the plots, especially in the first season, are similar as well. But as they say in the show, "We're scientists, not magicians," and that's where the shows diverge. Perhaps most notably, the show lets you in on what the Living Lie Detector is seeing and doing, so that the audience start to see the cues that they use to see when people are lying. The show quickly comes into its own, and by the second season, it's a real joy to watch Tim Roth play the role of Cal Lightman.note Like it used to be with Simon Baker playing Patrick Jane.

Initially ordered for just 13 episodes, it was a big hit with audiences at first, getting it a full second season. But its ratings rapidly declined, leading to its cancellation as of May 10, 2011 by FOX, ending after its third season of 13 episodes.

For the South Korean series of the same name, see Lie to Me (SK).