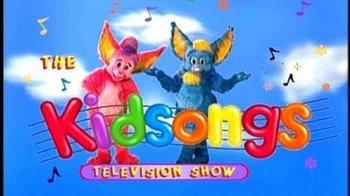 Kidsongs is an American children's media franchise which includes Kidsongs Music Video Stories on DVD and video, The Kidsongs TV Show, CDs of favorite children’s songs, song books, sheet music, toys and an ecommerce website. Kidsongs was created by producer/writer Carol Rosenstein and director Bruce Gowers of Together Again Productions (TAP), both of whom are music video and television production veterans. The duo had produced and directed over 100 music videos for Warner (Bros.) Records (WBR) and took their idea of music videos for children to the record label. WBR funded the first video, “A Day at Old MacDonald’s Farm”. Shortly thereafter, a three way partnership between TAP, WBR and View-Master Video was formed with TAP being responsible for production and WBR and View-Master responsible for distribution to video and music stores, and toy stores respectively.
Advertisement:

The home video series was launched with four Kidsongs Music Video Stories episodes at New York's Toy Fair in January 1, 1985. "A Day at Old MacDonald’s Farm” was one of those first four. It's sold over four million copies and won the Vira Award. Each half-hour Music Video Stories episode features ten to fifteen songs, in a music video style production starring talented kids. They sing and dance their way through well known children's songs, nursery rhymes, and covers of pop hits from the 50's, the 60's and the 70's—all tied together by a simple story and theme.

The TAP/WBR/View-Master Video (Viewmaster was acquired by Tyco in 1992-1994) partnership produced 16 Kidsongs episodes of the Music Video Stories. In 1994, WBR and TAP bought out Tyco's distribution rights and produced three more View-Master videos: "Country Sing-Along", "Billy Biggle's Favorite Songs", and "Boppin' with the Biggles" and two Kid Vision videos in 1995: "Let's Put on a Show" and "Baby Animal Songs", as part of a new venture with another division of Warner Bros.—Warner Vision. In 1997, TAP acquired all rights from WBR/Warner Vision and become the sole owner of all Kidsongs properties.

Later in 1997, TAP entered into a distribution/production agreement with Sony Wonder which resulted in the production of four more titles: "I Can Dance!", "I Can Do It!", "Adventures in Biggleland: Billy's Birthday" and "Adventures in Biggleland: Meet the Biggles". That agreement ended in 1998 and in 2002 distribution rights were licensed by Image Entertainment who continues to distribute the videos.

The Kidsongs TV show also has a convoluted production/broadcast history of its own. During the first season in commercial syndication, it was produced by TAP and WBR and distributed by Orbis Communications from 1987-1988. After the season ended, the show was untouched until being resurrected for public television from 1994 to 1998. For that series run, the show was produced during the first two seasons by TAP and WBR alongside Chicago public television station WTTW and was distributed by the American Program Service. For the final season, Sony Wonder took over WBR's co-production duties.

From 1985 to 1998, 25 Kidsongs home video episodes encompassing 300 children's songs, nursery rhymes, and cover versions of adults' pop songs were produced featuring a variety of subjects that are of interest to kids: animals, birthdays, the zoo, the amusement park, camp adventure, fantasy, vehicles and general silliness. 14 have been certified platinum by the RIAA, with 5 of them having sold more than 2 million copies. As of now, over 19.5 million copies of the videos have been sold.

The following is a list of Kidsongs music video titles originally released on VHS and Betamax, and now currently available on DVD and Blu-Raynote As well as iTunes and other streaming platforms.: