Fanfic / The First Of Many 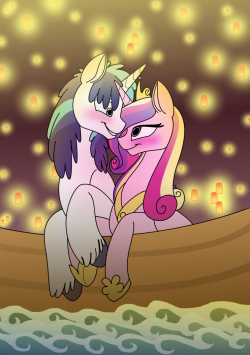 If only you knew what it took to get here.

A fanfic by NotARealPonydotcom, about how Princess Cadance and Shining Armor first date failed in all the right ways.

Tonight is the Midsummer Festival, and love is in the air. Unfortunately, Princess Twilight Sparkle is indoors and hysteria is the only emotion present as she's panicking over the prospect that her first date ever will end in disaster. With Ocean Floor, the bold Royal Guard who asked her out, about to arrive to meet his date, Twilight's Cool Big B.B.B.F.F. Shining Armor launches a daring rescue of his sister's night.

That is to say, he tries to calm her down by telling him how his first date with his future wife Princess Cadance went. And as Twilight learns, no first date could possibly go worse than Shining and Cadance's. But if everything went so wrong, how do everything end up so right?

The story is complete, and all three chapters can be found though this link

Tropes used by this story include: