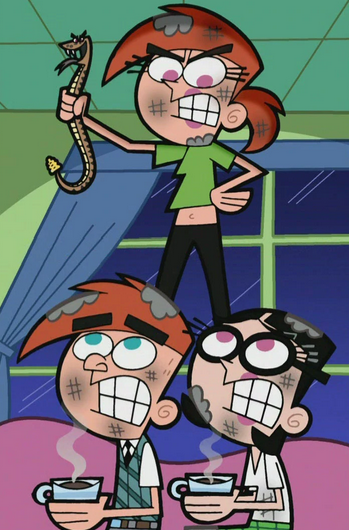 Abusive Parents is a very common trope. This is the Inverted Trope; when the child is abusive to the parent, physically, sexually, financially, or emotionally. While these characters can be children and will usually be an Enfant Terrible who exhibits Troubling Unchildlike Behavior, a particularly extreme example of a Bratty Teenage Daughter, or simply someone that proves Teens Are Monsters, they may be an adult. In that case, such cruelty will often fall under Elder Abuse, although the parents can also be of any age. In rare cases, it may either be an inversion of Wicked Stepmother or a mistreatment of the Good Stepmother.
Advertisement:

This is closely related to Antagonistic Offspring, but the relationship is the direct opposite of abusive parents be it an Evil Matriarch or an Archnemesis Dad. This is a much more severe, villainous form of that trope, and it's almost impossible to have a heroic character who is abusive, while antagonism can be justified, and (as with abusers in normal life), the abuser can be Affably Evil or (more likely) Faux Affably Evil. It's in fact common for antagonism to apply to an evil parent and to be justified as a heroic characteristic. Most of the time, the parents of the abusive offspring are often too terrified to disobey their demands which results in the child/offspring to quickly be lead into a position where they're superior to their parents.

This may be motivated by hatred of the parent in question (or both of them), but that is not a requirement. In order to distinguish it from Calling the Old Man Out, it is important that this is at least shown to be a recurring trait or incident rather than just happening once. It may be that the abusive child has a Freudian Excuse relating to their own parent (who may themselves be abusive), but it's not necessary. The most sympathetic version will be acting out of revenge, determined to give the parent A Taste of Their Own Medicine.

The natural conclusion is the Self-Made Orphan, but not all who fall under that trope will also be abusive, as it's common for them to be presented as "snapping" rather than as a cumulation of past behavior.

Compare Big Brother Bully, and contrast Even Bad Men Love Their Mamas, when the mama is an exception to her son's reign of terror. Also contrast Double Standard: Violence, Child on Adult, which may also be applied to young abusive offspring. Will lead to Calling the Young Man Out if the parent has enough of the child's abusive behavior. When the offspring in question is a child, this may invoke (or be a part of) a Kids Versus Adults conflict.