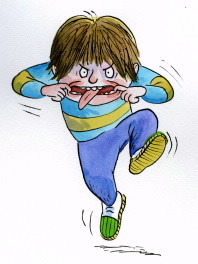 Horrid Henry is a long-running book series by the American-born British author Francesca Simon that began in 1994 and still continues to this day.note Sort of. After the 24th book's publication, there was a four-year space—the biggest in the entirety of the book series. Incidentally, book 25 coincided with the series' 25th anniversary, making it ambiguous to whether the series is over for good.

Each book contains four stories that gave the reader an insight into the life of a mischievous and rowdy primary school student called Henry and his antics in school and at home. There are occasional Day in the Limelight chapters in which a story is told about another character; this was usually about Henry's younger brother Perfect Peter, who is the complete opposite of him and implied to be the favourite child of their parents.

The book series became really popular in the Turn of the Millennium and spawned an animated TV series in 2006 (which continues today) that mostly adapted some of the short stories into ten-minute episodes, before making episodes of its own in The New '10s after they ran out of stories to adapt.

This was then followed by a live-action 2011 movie adaption named Horrid Henry: The Movie in which it was up to Henry and his friends to save the school from being in the hands of a cruel private school principal.

. Not to be confused with Horrible Harry.