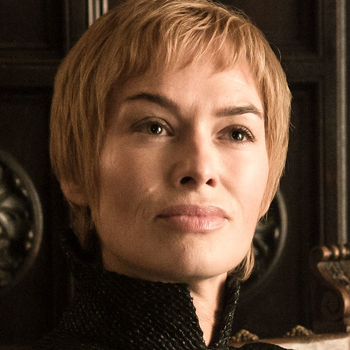 "When you play the game of thrones, you win or you die. There is no middle ground."

"Everyone who is not us is an enemy."

Elder twin sister of Jaime and older sister of Tyrion. Mother of Joffrey, Myrcella, and Tommen. Daughter of Tywin. Wife of King Robert Baratheon and Queen of the Seven Kingdoms of Westeros by marriage at the beginning of the series. However unbeknownst to her husband their children are in fact the by-product of an incestuous affair with her brother Jaime. Ned Stark's discovery of this fact becomes one of the main instigators that leads to the War of the Five Kings. Sadistic, selfish, ambitious, ruthless, manipulative, vindictive, and seeing enemies (true and false) everywhere, Cersei is a horrible human being who thinks only of two things: to keep her children safe and to be the only queen of Westeros.

After a series of disastrous events, including the deaths of Joffrey, Tywin, and Myrcella, Cersei blows up the Great Sept of Baelor in order to remove all her political enemies within King's Landing. The triumph has a bitter taste, since her last son Tommen is so horrified by her monstrous act that he commits suicide. After that, Cersei crowns herself Queen of the Seven Kingdoms and the first of her name, and seeks to solidify power within the Seven Kingdoms to create a new dynasty for herself. However, her reign may be short, as the last of the Targaryens is crossing the sea to take her throne. Worst of all, her hated brother Tyrion is the main ally of her new enemy...