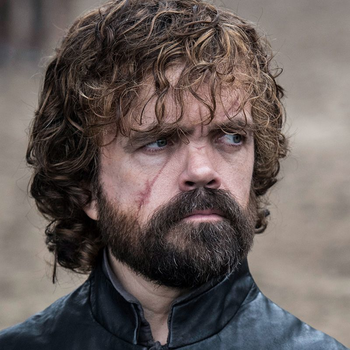 "Never forget what you are. The rest of the world will not. Wear it like armor, and it can never be used to hurt you."

"Tyrion Lannister is one of the few people alive that can make this country a better place. He has the mind for it, he has the will and he has the right last name."
— Varys

The youngest Lannister sibling, son of Tywin and brother of Jaime and Cersei. As Tyrion was born a dwarf and his mother died during childbirth, he is resented by Tywin and Cersei, while Jaime is the only relative who is nice to him. At the beginning of the series, knowing that no one will ever take him seriously, Tyrion uses his status as a Lannister to live his life with wine and prostitutes.

Tyrion's life changes forever when Catelyn Stark accuses him of trying to murder Bran Stark, and imprisons him for it. Tyrion uses his intelligence to escape, and after a series of unexpected events, he is sent by his father to impose order on the capital of King's Landing, as well as his nephew Joffrey, the new king, as civil war begins. He serves as acting Hand of the King, doing a great job of protecting the city, but when his father returns, Tyrion is demoted to Master of Coin, losing much of his power and becoming vulnerable to the machinations of his enemies. When Joffrey is murdered, Tyrion becomes the victim of a rather obvious frame-up. After a rather blatantly biased trial and being betrayed by his lover Shae, Tyrion demands a trial by combat to determine his fate, only for his champion, Oberyn Martell, to be killed by Gregor Clegane during the trial. Following this, Tyrion is sentenced to death by Tywin. The night before his execution he is freed from his cell by Jaime, only to flee Westeros with the help of Varys after killing Shae and Tywin.

Initially driven into despair by the events that transpired against him Varys gives him a new lease in life by sending him to Meereen to meet Daenerys Targaryen. After getting to know each other better, Daenerys trusts Tyrion's valuable advice, and eventually names him her Hand of the Queen. Tyrion admires and even falls in love (platonically) with Daenerys. Together, the two return to Westeros, and Tyrion plans to help her win the Iron Throne. However, fate has different ideas...