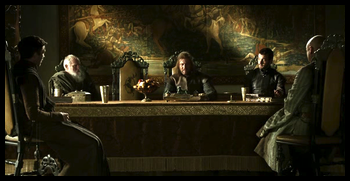 A tradition as old as the Iron Throne, the Small Council is comprised of the King's top advisers who determine all the basic administrative duties that comprise the rule of the King. They are headed by the King's Number Two, the Hand of the King. The King may or may not attend the Council meetings in person, as per his leisure or interest.

Advertisement:
In General
Hand of the Queen Qyburn

Hand of the Queen Qyburn 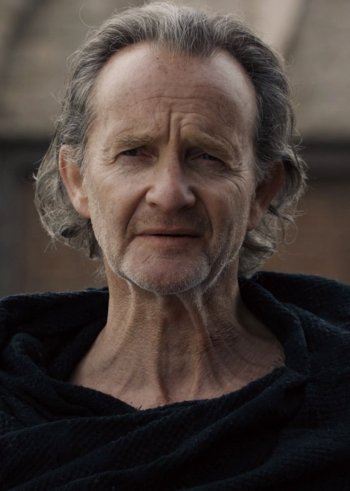 "The only way to treat disease is to understand disease."

Jaime Lannister: You are no maester. Where is your chain?
Qyburn: The Citadel stripped me of it. They found some of my... experiments... too bold.

An ex-Maester who had been captive in Harrenhal. He later accompanied the maimed Jaime Lannister on his journey to King's Landing, and remained there as a physician in service to the crown. Ingratiating himself to Cersei, he becomes one of her closest and most valuable allies. After Varys leaves King's Landing, Cersei appoints Qyburn Master of Whispers in his place, and he later becomes Hand of the Queen when Cersei seizes uncontested power.

Non-Incumbentnote by the end of Season 6 Small Council Members

Lord Jon Arryn, the Hand of the King (Pre-Series)

See Game of Thrones - The Order of the Maesters.

Lord Eddard Stark, the Hand of the King and Protector of the Realm (Season 1)

Lord Tywin Lannister, the Hand of the King and Protector of the Realm (Pre-Series, Seasons 2-4)

Ser Kevan Lannister, the Hand of the King and Protector of the Realm (Seasons 5-6)

Other Members of the King's Court 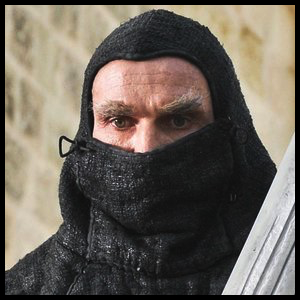 Sansa Stark: Why won't he speak to me?
Sandor Clegane: He hasn't been very talkative these last twenty years. Since the Mad King had his tongue ripped out with hot pincers.
Joffrey Baratheon: He speaks damn well with his sword, though.

The mute royal executioner or "The King's Justice". 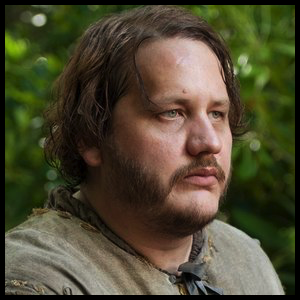 An alcoholic knight reduced to being a court fool.

Lord Janos Slynt
Commander of the City Watch. Replaced by Bronn in season 2 and sent off to Castle Black.