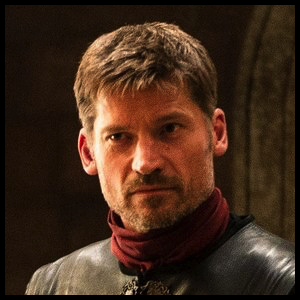 "There it is. There's the look. I've seen it for seventeen years on face after face. You all despise me. Kingslayer. Oathbreaker. A man without honor."

Elder son of Tywin Lannister, twin brother of Cersei, and older brother of Tyrion. A member of the Kingsguard, and known across the lands as one of the finest swordsmen who ever lived, Jaime served under the "Mad King" Aerys II Targaryen for several years. Jaime quickly became infamous amongst the Seven Kingdoms however for murdering the Mad King near the end of Robert's Rebellion, an action that led to him becoming known as The Kingslayer. Jaime also has an incestuous relationship with Cersei, being the real father of their three children. The truth is that, unbeknownst to the rest of the world, Jaime was saving the rest of King's Landing from the Mad King who intended to destroy the city with hidden caches of Wildfire. After meeting Brienne of Tarth and losing his sword hand Jaime becomes more humble, and is now trying to live his life for his own sense of honour even if the rest of the world continues to despise him. After the forced retirement of Ser Barristan from the Kingsguard Jaime is named the Lord Commander of the Kingsguard.