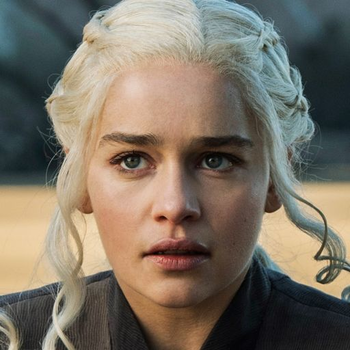 "My reign has just begun."

"They have a choice. They can either live in my new world or die in their old one."

Daenerys Stormborn is the last known living scion of House Targaryen and therefore, is the claimant Ruling Queen of the Andals and the Rhoynar and the First Men, Lady of the Seven Kingdoms and Protectrix of the Realm. At the beginning of the series, she was subject to the sordid whims and vile manipulations of her cruel elder brother, Viserys. Through her arranged marriage to Khal Drogo, Daenerys discovers her own power, influence, and self-worth along with the realization that she is far better qualified to reclaim her father's throne than her deranged sibling. Using blood magic, she hatches three dragons for the first time in hundreds of years and is suspected to perhaps even be Azor Ahai, the Princess who was Promised. Daenerys has gone from pawn to player, traveled the breadth of Essos, gathered an army and conquered three cities, building a reputation that has even reached her father's enemies across the sea in Westeros. After abolishing slavery in Essos once and for all, Daenerys has returned to her birthplace of Dragonstone in Westeros in order to reclaim the Iron Throne from her enemies.

Advertisement:
open/close all folders
A-F
G-L
M-P
her Black-and-White Insanity tends to rear its head in the form of her denouncing those who are against her as "evil" and presuming herself to always be "good" regardless of context.
R-Z
Advertisement:
Feedback

Having laid siege to King's Landing, Daenerys Targaryen declares to the Unsullied and the Dothraki that having "liberated" King's Landing, they will move on to the entire world.

Having laid siege to King's Landing, Daenerys Targaryen declares to the Unsullied and the Dothraki that having "liberated" King's Landing, they will move on to the entire world.