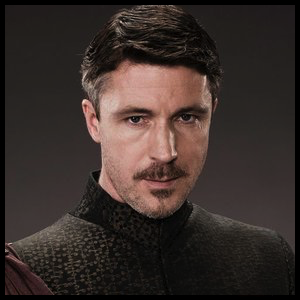 "Only the ladder is real. The climb is all there is."

The sole member of House Baelish, one of the lowest noble houses. After serving as Master of Coin on King Robert's and King Joffrey's Small Councils, he's appointed Lord of Harrenhal. Littlefinger presents an affable mask to his fellows and betters, but he is unashamedly one of the most ambitious and talented schemers in Westeros, with an information network to rival that of Varys. He is one of the few characters within the series to gain in stature and power over time, rather than lose it.

Despite having been formally granted the Lordship of Harrenhal and the Lordship Paramount of the Trident, Baelish apparently has no interest in either, and so those titles remain unclaimed (and the latter exercised de facto by Walder Frey). Instead, he went to the Vale to "serve" his new wife, Lady Lysa Arryn. After Baelish murdered Lysa, he became guardian to Lysa's son, Robin, the new Lord Paramount of the Vale of Arryn, and the leading figure in the Vale's regency council, along with Lord Yohn Royce. Royce and Baelish then made the decision to aid Sansa Stark and Jon Snow in retaking Winterfell from House Bolton. Baelish has since resided in Winterfell as an advisor to Jon and Sansa.