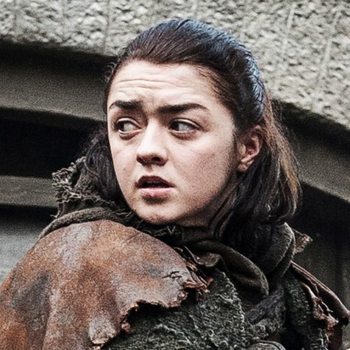 "My name is Arya Stark. I want you to know that. The last thing you're ever going to see is a Stark smiling down at you as you die."

"I see a darkness in you. And in that darkness, eyes staring back at me. Brown eyes, blue eyes, green eyes. Eyes you'll shut forever."
— Lady Melisandre of Asshai

The second daughter of Eddard and Catelyn Stark and their third child. In contrast to her older sister Sansa, Arya is tomboyish, independent and is particularly close to her bastard half-brother Jon Snow. After being smuggled out of King's Landing following her father's execution, she travels Westeros as a fugitive, contemplating with her own eyes the terrible consequences of the War of the Five Kings. After concluding that all her family members are dead or missing, she travels to Braavos to train with the Faceless Men. She has a list of names of people she's resolved to kill for wronging her and her family, and her experiences harden her into a young but determined killer who slowly but surely begins to cross those names off, carving a bloody swathe through House Stark's enemies.

She's one of the lead fighters in the Fighting Game Multi Versus, appearing alongside other various Warner Bros. characters.