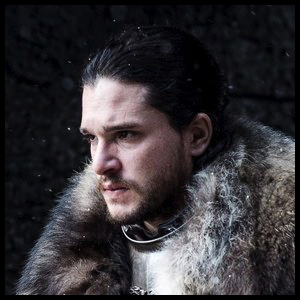 "I want to fight on the side that fights for the living."

"Mormont himself chose Jon to be his steward. He saw something in Jon. And now we've all seen it too. He may be young, but he's the commander we all turned to when the night was darkest."
— Samwell Tarly

The believed-to-be illegitimate son of the honorable lord of Winterfell, Eddard Stark. His prospects limited by his bastardy, Jon joins the Night's Watch, the once-noble order created to guard Westeros from threats beyond the Wall but has since fallen into disrepair. As the rest of the Starks face the dangers of the game of thrones, Jon must fulfill his duty to defend the realm and learns of the growing threat from the otherworldly White Walkers beyond the Wall. To prepare against the wildlings' attack on the Wall, Jon becomes a Fake Defector and learns of their plans. However, he becomes sympathetic to the wildlings and falls in love with the fierce wildling woman Ygritte but must betray both to defend the realm. Though the Night's Watch is able to fend off the attack with aid from Stannis Baratheon, Ygritte ends up dying in battle.

Elected the 998th Lord Commander of the Night's Watch, Jon negotiates an alliance with the wildlings against their common enemy, the Night King, who is the leader of the White Walkers and the Army of the Dead. This earns Jon the animosity of his Watch brothers, who assassinate him in a mutiny, but Jon is resurrected by Melisandre. After working with his sister Sansa and a group of unexpected allies to defeat the monstrous Ramsay Bolton, they retake Winterfell. The Northern lords name Jon as the new King in the North. Jon travels south to negotiate an alliance with Daenerys Targaryen for her help against the Night King. Though they initially come to stand-stills on terms, they begin to connect and eventually fall in love. Upon seeing the threat is real herself, Daenerys vows to defeat the Night King and Jon bends the knee to her. Meanwhile, it's revealed Jon is not the illegitimate son of Ned Stark, but the trueborn son of Ned's sister Lyanna Stark and Prince Rhaegar Targaryen. And that complicates the situation...