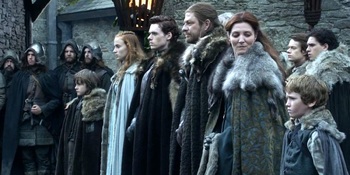 What a happy family, right? It would be tragic if something awful happened with them...
Winter is coming.
— Lord Eddard Stark

Where it all began.

We start our series in the far north of the Seven Kingdoms of Westeros, at the 700-foot tall frozen barrier known simply as The Wall. Three rangers of the Night's Watch — Will, Gared and the knight Ser Waymar Royce — have been sent beyond the Wall to track a band of wildlings that have committed recent raids and ambushes. Will is the one to find the wildlings — already dead, their body parts spread in a circle. Even worse, by the time Will gets the rest of his party there, said body parts have gotten up and wandered off. As the rangers head back for the Wall, shadowy figures of legend, the White Walkers, show up and begin the slaughter anew.

After a freaking awesome credits sequence, our young ranger Will is the only one left alive. He's in (literally) greener pastures, having made his way south of the Wall. He's a deserter, a wanted criminal. He is gathered up by guardsmen in the employ of Lord Eddard Stark of Winterfell, Warden and nominal ruler of the North. Messengers interrupt a happy afternoon at home: Ned's heir Robb and bastard son Jon Snow teach his next-youngest son, Bran, how to shoot, whilst daughters Sansa and Arya occupy themselves with needlework and Ned presides over it all with his wife Catelyn. At news of the captured deserter, Ned takes three of his sons (Robb, Jon and Bran), as well as his ward Theon Greyjoy, with him to pass judgment.

Bran, all of ten years old, watches his father pass sentence over the renegade. Will is brought to the block, where he confesses upfront that he knows he is a deserter and that he should have reported back to his superiors, but he saw the White Walkers and had to warn the people. Ned does not believe his story, and with a swing of his Valyrian steel greatsword named "Ice", Will is executed by beheading. Ned explains to Bran that the blood of the First Men flows in the veins of the Starks; "Our way is the old way." Ned feels he owes it to the men he executes to look into their eyes and hear their final words. "The man who passes the sentence should swing the sword."

As the Stark entourage heads home through the forest, however, there is another unusual interlude: on the road lies a dead direwolf, killed in the struggle with its intended prey, a stag... and its pups, still alive and quite adorable. Though Ned feels it would be kinder to put them out of their misery, Jon points out to his father that there are five trueborn children, five puppies, the direwolf is their House sigil, etc. Jon finds the sixth pup, an albino runt, a little ways away from the rest of the litter.

There's a short scene at King's Landing, the capital of Westeros, where a blonde man and a blonde woman — Ser Jaime Lannister of the Kingsguard and his twin sister, Queen Cersei Lannister — have a cryptic conversation about keeping secrets whilst a funeral goes on. Up at Winterfell, Catelyn brings a letter to Ned explaining what the funeral was about: it was for Lord Jon Arryn of the Eyrie, Hand of the King these past seventeen years until his untimely death by disease. The letter also claims that Robert Baratheon, the First of his Name, King of the Andals and the First Men, Lord of the Seven Kingdoms and Protector of the Realm, is coming north to Winterfell to visit his best friend Ned, who he has not seen in years. Three guesses why.

The month of travel this requires is abbreviated, consisting mostly of a shirtless Robb, Jon and Theon getting prettied up. Finally King Robert arrives in Winterfell, which Bran observes from the rooftops (he loves to climb) and Arya from under a half-helm (she's a tomboy). The king's family are introduced — his children Joffrey, Myrcella and Tommen, his wife Cersei, her twin brother Jaime; but their younger brother, the dwarf Tyrion Lannister, is nowhere to be found. (Jaime later finds him in a brothel, partaking in the goods, drinking and dispensing snark.) It becomes quickly clear that Robert and Ned are old friends; in fact, Robert was once betrothed to Ned's younger sister Lyanna, before she contracted a serious case of death. Whilst visiting her statue in the Stark family crypts below Winterfell, Robert asks Ned to take Jon Arryn's place as Hand of the King. He also offers to betroth Joffrey to Sansa, joining House Stark and Baratheon. The scene in the crypts also introduces some of the series' Back Story: seventeen years ago, Robert, Ned and Jon Arryn fought a rebellion against the Targaryen dynasty, deposing them and installing Robert on the Iron Throne. But two Targaryens still live...

In the Free City of Pentos, across the Narrow Sea, Princess Daenerys Targaryen awaits in a spectacularly flimsy gown. Her rather creepy brother, Viserys Targaryen, self-proclaimed Rightful King of Westeros, arrives and announces that, with the help of Magister Illyrio Mopatis, he has successfully brokered an Arranged Marriage for her: she will wed Khal Drogo, a horselord of the nomadic Dothraki, whose army Viserys will use to reconquer Westeros. As part of the visit, Viserys strips her naked and fondles her breast, whilst Daenerys stands there and woobies through it. Viserys tells her that today she must "be perfect for him" and when his little sister can't answer for fright he warns her not to "awaken the dragon" by displeasing him before stating that this is the day the chroniclers will remember as the day his reign began. Dany, for her part, wades into a bath which is visibly steaming, despite protestations that she will burn herself. This will be important later.

Khal Drogo arrives. He is a man of few wordsnote (a fact lampooned when actor Jason Momoa submitted his work on the series for Emmy consideration) and Viserys is not entirely sure he approves of his new bride and her spectacularly flimsy gown. Daenerys, understandably, wibbles that she'd rather not enter into this dynastic marriage, but Viserys is having none of it: he wants the Seven Kingdoms, and he claims "I would let his whole tribe fuck you, all forty thousand men and their horses too, if that's what it took" to get it. To judge by her Reaction Shot, Dany is rather skeeved out.

Back in Winterfell, there's a feast going on for the king. Robert is doing what he does best — seducing serving wenches — whilst Queen Cersei looks on in cold disapproval, largely unreceptive to Lady Catelyn's courtesy. Outside in the yard, Jon Snow is hacking away at a practice dummy with a sword, having been barred from the feast for fear of offending the royal family, and is thus best positioned to receive his uncle Benjen Stark, First Ranger of the Night's Watch, who has come for the feast. Jon begs Benjen to let him join the Night's Watch. He also runs into another late arrival, Tyrion Lannister, who (in addition to providing a serious dollop of As You Know) gives Jon some useful words to live by: "Never forget what you are; the rest of the world will not. Wear it like armor. Then it can never be used to hurt you." And, at Jon's retort that Tyrion knows nothing about bastardy: "All dwarfs are bastards in their father's eyes."

After the feast, Ned and Catelyn recline in bed trying to decide what to do. Neither want Ned to go south to the Wretched Hive they call a capitol, King's Landing, but the problem with kings is that it's difficult to turn them down gracefully. The situation is worsened by the arrival of a letter from Lady Lysa Arryn, Catelyn's sister and Jon Arryn's widow. This letter claims that Jon was murdered by the Lannisters, and suggests they plan to move next against Robert. Ned must now decide whether to abandon his best friend to almost-certain death or join him in it. Considering that Ned is a living embodiment of Honor Before Reason, you can guess which he's going to pick.

Back outside the walls of Pentos, Daenerys is getting married to Khal Drogo. It's a savage business, with women dancing and men raping them, or occasionally fighting over who gets raping rights. Dany does get three wedding gifts. One is a few books from Westeros, a link to a home she's never even seen. The second is the gift-giver: Ser Jorah Mormont of Bear Island, known to the Dothraki as "Jorah the Andal," the Northerner is a Westerosi knight who abandoned his modest holdings, he swears his service and his sword to the Targaryen siblings. And the third is from Magister Illyrio: dragon's eggs, three of them, long petrified from age but still beautiful. Finally it's time for the consummation. Khal Drogo takes her far away from Pentos and bends the weeping girl over.

Finally, we're back at Winterfell, where Tyrion banters with Sandor Clegane, called The Hound, and Robert leads a royal hunting party out of the castle. Bran, who is going south to King's Landing with his father, takes this opportunity for one last climb on the walls of Winterfell. He comes across a blonde man and a blonde woman, naked and alone, doing what naked men and women have done together whilst naked and alone since the time of the First Men. One is the queen, Cersei Lannister. The other is not Robert, which is bad enough. Even worse: it's Jaime.

He sees them. They see him.

Bran loses his balance and almost falls, but Jaime rushes over and saves him. "It's all right, it's all right..." "He saw us!" Cersei retorts. "I heard you the first time," Jaime tells her. "How old are you, boy?" "Ten," Bran replies, clearly scared out of his wits.