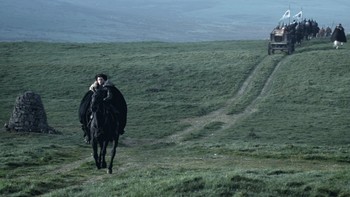 Tyrion: I hope the boy does wake. I'd be very interested to hear what he has to say.
Jaime: My dear brother, there are times you make me wonder what side you're on.
Tyrion: My dear brother, you wound me. You know how much I love my family.

We open with the same glorious credits... except that they've changed! Now, instead of showing Pentos, they show the Dothraki grasslands and Vaes Dothrak. We learn in the first scene that this is where Daenerys is now, travelling with her new husband and his tribe. Daenerys is having a bad day; she's tired, she's sick of eating dried horse meat, and she's so saddle sore that she needs the help of three maids just to get off her horse and walk to a tent. Jorah Mormont tells her that it will get easier, but Daenerys doesn't look like she's buying it. Jorah then takes Viserys aside to suggest he return to Pentos and wait in comfort for the Dothraki to return, but Viserys wants to personally ensure Khal Drogo holds up his end of the bargain. He also asks Jorah what happened in Westeros to make him flee across the Narrow Sea; turns out Jorah caught some poachers on his land and sold them to a slaver. Hang on, isn't he meant to be a good guy?

We return to Winterfell, to find Tyrion Lannister waking up in a kennel, very hungover and cuddling a dog. His nephew Joffrey is there with his bodyguard. Tyrion informs Joffrey that he will give his sympathies to the Starks before they leave. When Joffrey complains that he can't abide the wailing of women, Tyrion slaps him! Three times! And when Joffrey cries and attempts to protest, Tyrion outright orders him to go to the Starks and pay his proper respects to them.

Tyrion joins his siblings and Cersei's other children, Myrcella and Tommen, for breakfast. Myrcella asks if Bran is going to die, and Tyrion says apparently not. All signs suggest Bran will survive "falling" from that tower. Though Bran lingers in a coma, Improbable Infant Survival may be in play after all! (Cersei and Jaime look very uncomfortable about this.) Tyrion then announces he's going north to see the Wall before they go home. Jaime says he'd rather die cleanly than live as a cripple or a grotesque; Tyrion disagrees, naturally, and mentions that he'd be interested to hear what the boy might have to say.

Cersei visits Catelyn at Bran's bedside, and tells her about her first son, a little boy with black hair who died of a fever. Jaime, meanwhile, visits Winterfell's armory, where he finds Jon Snow helping to forge a sword. Jaime sarcastically thanks him for guarding them all from the perils beyond the Wall. "I'm sure it will be thrilling to serve with such an elite force. And if not, well, it's only for life." After the smith is finished, Jon goes to visit Arya, who is packing to leave Winterfell, helped by her pet wolf Nymeria. Jon tells her he has a present for her, and to close the door. He gives her the sword he had Mikken forge for her. It's small and skinny, just like Arya. "First lesson: stick them with the pointy end." Jon tells Arya that all the best swords have names and Arya names the sword Needle. She and Jon say their goodbyes, with Arya glomping Jon and Jon smiling as he hugs her back. Afterward, Jon goes to visit Bran. Catelyn's not happy to have him there, but allows him to speak to Bran. Jon tells the still-comatose Bran to come and visit him at the Wall when he's well. After a few minutes, Catelyn harshly throws him out. Outside, Jon and Robb share their farewell, hugging each other good-bye.

Ned and Jon say their goodbyes, as Ned leaves for King's Landing and Jon leaves for the Night's Watch with his uncle, Benjen Stark (First Ranger of the Night's Watch). As they share farewells, Ned tells Jon, "The Starks have manned the Wall for thousands of years and you are a Stark. You might not have my name but you have my blood." Ned promises Jon that the next time they see each other, they will talk about Jon's mother. The topic comes up again at lunch, with Ned and King Robert by the side of the road reminiscing about old times. Robert mentions that there's only been one woman who has made Ned Stark forget his honor. In between Robert dredging up names (mostly of women he's bedded; "Thank the gods for Bessie! And her tits!"), Ned names her "Wylla," but will not speak of her. Finally, Robert gets down to business: he's received a message updating him on Daenerys Targaryen's marital status. It ignites Robert's legendary hatred of the Targaryens, despite Ned reminding him that there's an ocean between Westeros and this hypothetical avenging Dothraki horde, and that the Dothraki have no fleet.

Speaking of Dothraki, in the grasslands Khal Drogo is still bending Daenerys over horsie-style every night. She doesn't look like she's having fun. But she seems to find solace in a fire-filled dream where flames crackle and dragons hiss...

On the journey to the Wall with Benjen, Jon and Tyrion discuss the falling standards of the Watch as nowadays, many of the Night's Watch brothers are criminals. As they discuss the Lannister history with the Targaryen and Baratheon regimes, young Jon is appropriately disenchanted with the Imp's observations of life: "Life is full of these little ironies" — the Lannisters served the previous king for years until Jaime Lannister killed him, then Cersei married the new king and now JerkAss Joffrey will be king after him. Tyrion says he, himself, would have been killed because he was born a dwarf but survived because he was born into the wealthiest family in all the Seven Kingdoms and, as a result, must use his mind for the honor of his house. He parallels this with Jon, who is an illegitimate son with nothing to inherit, but is set to forge his own path and earn his own honour by joining the ancient order of the Night's Watch. Jon argues that joining the Watch is a noble aim as the Wall defends the realm but Tyrion dismisses this. Jon takes a stiff drink of wine after their campfire conversation.

In Winterfell, Catelyn continues her vigil over sleeping Bran, explicitly neglecting her duties as the Lady of Winterfell and causing Robb to step up in her stead. Robb gives her the first paragraph of a "What the Hell, Hero??" speech, but is derailed by a fire elsewhere in the castle. He rushes away, leaving the window open for the howls of the direwolves to be heard. While he's gone, a creepy-looking man appears into the room with a wickedly-curved blade and almost literally announces his intention to slit Bran's throat. Catelyn fights him with every weapon at her disposal, but it's Bran's direwolf who saves the day (direwolf + assassin aimed at direwolf's master = dead assassin). The direwolf snuggles up to his bedded master once the douche is bled out; d'awwww!

Back on the Dothraki Sea, Dany's three handmaids (Irri, Jhiqui and Doreah) fuss over her scrapes and bruises. They trade stories about where dragons come from; most of them believe them to be extinct. ("It is known.") Daenerys finds out that Doreah is a bed slave and is trained in the arts of pleasure. Dany asks her to teach her how to seduce Khal Drogo. Fanservice and Les Yay ensue.

Back in Winterfell, Catelyn, with her hands bandaged, visits the tower from whence Bran fell. She finds a single blonde hair. She then calls a council in the godswood at Winterfell (of herself, Ser Rodrik Cassel, Maester Luwin, Robb and Theon), and gives voice to her theory: Bran saw something he was not meant to see, warranting not only his Destination Defenestration but the clumsy assassination attempt as well. Ser Rodrik also points out that the dagger is too fine a weapon for a mere cutthroat: "The blade is Valyrian steel, the hilt dragonbone." Catelyn decides to ride for King's Landing with Rodrik Cassel, leaving Winterfell in the care of Robb and Bran's life in the care of the gods.

We briefly return to the Dothraki Sea, as Daenerys works up her gumption and manages to first fend off Khal Drogo and then seduce him. With the Marital Rape License abolished, the couple have a night of actual tender lovemaking with each other.

The king's procession has stopped for the night at The Inn at the Crossroads, and Sansa takes the opportunity to wander, her direwolf Lady at her heels. First she runs into Ser Ilyn Payne, the royal headsman, who has no lines because "the Mad King" had his tongue ripped out. Then she's trapped between him and The Hound, and it's hard to say who frightens her more. Prince Joffrey to the rescue! He takes her on a walk out to the river, where they come across two boys using sticks to play at swordfighting. Only, one of them's not a boy: it's Arya. Joffrey takes this opportunity to bully her opponent. His name is Mycah and he is the son of a butcher. He has a stick against Joffrey's real sword, which he uses to slice Mycah's face. When Arya whacks Joff on the back with her stick, he starts slicing at her instead. Once again, direwolves win the day: Nymeria comes out of nowhere and attaches herself to Joffrey's sword arm, teeth first. With Joffrey on the ground crying like a punk, Arya takes his sword and throws it into the river. Sansa tries to comfort the blubbering Joffrey, but he angrily tells her to go away. And while she goes for help, Arya flees into the forest.

Arya, knowing the queen will have Nymeria's head for harming the royal brat, makes Nymeria run away. Nymeria is adorable. Arya has to throw rocks.

It's past nightfall before Arya is found, and she's hauled directly before the queen. Joffrey has a very different version of events than Arya does, and Sansa is brought in as a tie-breaker. She refuses to corroborate either tale, leading Arya to grab her hair and shriek at her. (Cersei has the most awesome smirk.) King Robert is happy to let each child be disciplined by their father, but Cersei still wants blood, and demands that Nymeria be killed. Well, they don't have Nymeria... but they do have Lady. For once, Arya and Sansa agree on something, but Robert buckles before his wife's scorn. Cersei sends Ser Ilyn Payne, but Ned dismisses him and does it himself.

Outside, the Hound is returning from the hunt with the day's kill slung over his horse's back: Mycah, the butcher's boy. "You rode him down," Ned exclaims. "He ran," the Hound agrees. "But not very fast."

Ned attends his grisly duty, interspersed with shots of Bran in his bed at Winterfell. As one set of eyes close, the other set opens.