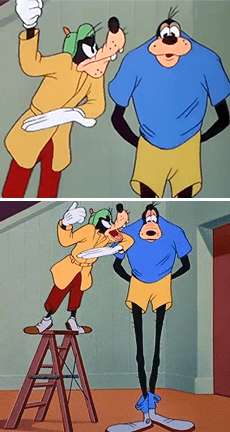 Well, he is their star player...
Number Two: He is exactly like you in every way... except 1/8 your size.
Dr. Evil: Breathtaking. I shall call him... Mini-me.
— Austin Powers: The Spy Who Shagged Me
Advertisement:

A visual gag where an extremely short character is introduced in a manner that makes them appear much taller than they actually are. Also the inverse, where someone (or something) of great size or height is made to appear normal-sized at first, or perhaps introduced in a shorter or chibi-like form.

Sister trope to Profile View Gag. A subtrope is Big Shadow, Little Creature, where this is done via a large shadow cast on the wall. Depth Deception is the Super-Trope — all examples that don't involve people should go there. May involve the use of Hitler Cam. See also Mister Big. Contrast with "Down Here!" Shot.