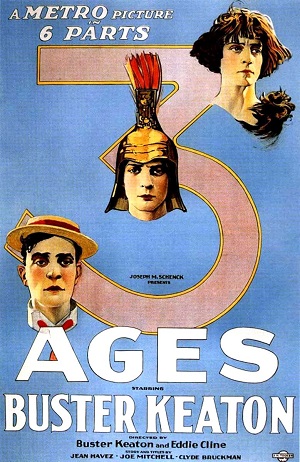 Through every age there is the faithful worshipper at Beauty's shrine.
If you let your mind wander back through History you will find that the only thing that has not changed since the world began is — LOVE. Love is the unchanging axis on which the world revolves.
— opening title card
Advertisement:

Three Ages is a 1923 film directed by and starring Buster Keaton.

For his first feature film, Keaton made an Affectionate Parody of D W Griffith's Intolerance, in which a Love Triangle plays out in prehistoric times, during the Roman Empire, and in 1920s America. (The idea was that if the feature-length version flopped, it could be re-edited into three separate shorts.)note Ironically Griffith did the same thing, releasing the two longer segments of Intolerance as stand-alone features in an attempt to recoup some of his losses after the film flopped. The film was almost lost to posterity, because by the 1950s the negative was badly damaged. It was eventually salvaged, but some shots are still heavily obscured.