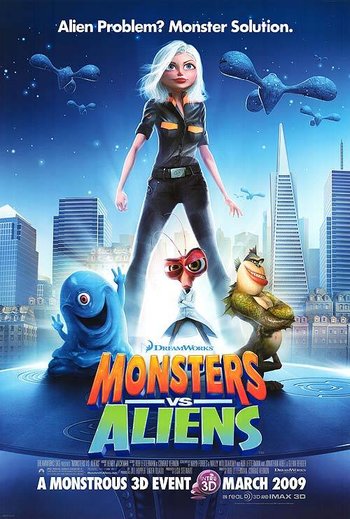 Monsters vs. Aliens is a 2009 All-CGI Cartoon movie made by DreamWorks Animation. The movie is a Sci-Fi comedy that pays homage to the monster movies of the 1950s, and uses Rule of Cool and Refuge in Audacity to hilarious effect in an almost MAD type of way.

The movie was the first DreamWorks film to be produced in a 3D format, using the "InTru3D" brand technology co-developed by the studio. A special promotion ran during the Super Bowl that could be watched using 3D specs sold alongside Sobe soft drinks.

The story features a four-eyed, alien fiend attacking the United States with a giant robot. After conventional weaponry proves ineffective, a high-ranking general, W.R. Monger, suggests using the monsters that the government has been capturing for 50 years and keeping in "Area 52" against them.

Oh, yeah, and The President of the United States of America playing a kickass keyboard solo... of Axel F.

Technically there's only one alien in the movie (except the clones) but "Monsters vs. an Alien" doesn't have quite the same ring to it.

It was later followed up by a Halloween Special, entitled Mutant Pumpkins From Outer Space. The monsters head out to investigate a UFO sighting in Susan's hometown on Halloween, and discover that an entire patch of pumpkins has been mutated by waste dumped on them by said UFO. These vicious vegetablesnote  Technically they're fruit rampage through the town and gobble up every piece of candy in sight, and it's up to the monsters to stop them before they turn the world into a giant pumpkin patch. The short later got a sequel in 2011 called Night of the Living Carrots, which follows up on that short's Sequel Hook.

A TV series of the same name aired on Nickelodeon (of Spongebob Squarepants and The Fairly OddParents fame) in March 2013.

Not related to Alien, Predator, or Alien vs. Predator. (We hope not.)

Monsters vs. Aliens provides examples of the following tropes:

The shorts provides examples of the following tropes:

What idiot designed this?

What idiot designed this?