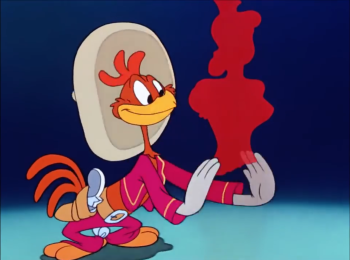 Panchito describing a Spicy Latina with his hands (wings?).
"Culture is the ability to describe Jane Russell without moving your hands."
— Bob Hope
Advertisement:

When a character is describing someone really sexy (or just their preferred gender in general), sometimes words are not enough. In these cases, the character may choose to show how sexy this sexy person is, by using a gesture that "paints a picture" of the sexy person's physique.

Some of the most classic examples are:

When used in a work, these kinds of gestures can call attention to the sexiness of the character being described, but they usually do more to emphasize the lustfulness of the character making the gesture, since characters commonly direct these gestures towards their Lust Objects. Think of it as the visual equivalent of the Wolf Whistle.

On the other hand, in scenarios where a character can't speak or doesn't speak the right language, gestures like these might be the only way the character can get the idea of "woman" (or "man") across to their audience. But even in these cases, a certain amount of lust may be implied.