First Rule of the Yard 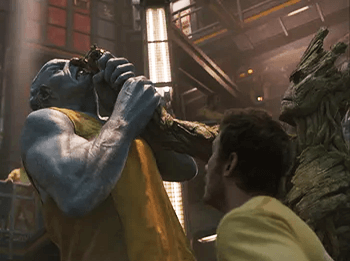 "Let's make something clear. This one here's our booty! You wanna get to him, you go through us! Or, more accurately... we go through you!"
"First rule of the yard, fuck-face — find the biggest guy and make him your—"
— Russell Collins (before one of Black Tom Cassidy's thugs punches him in the face), Deadpool 2
Advertisement:

Whether it is a temporary jail-cell in a small-town precinct or a privately owned maximum-security nightmare, you are likely to be stuck in an enclosed area full of tough-as-nails, neck-tat hooligans who will either poke you full of holes or plug the holes you already have at the first sign of weakness. Might Makes Right and dog-eat-dog in a place full of serial-killers and thugs who think that Violence Is the Only Option and you need to send a message that you ain't nobody's bitch.

Or at least that's how it always is in the movies.

When stuck in a cell, the main character or their overconfident, instigating friend will instantly try and be the tough guy. When played seriously, the first person they meet will immediately want to pick a fight with them out of a show of dominance, or perhaps they just don't like their face and we need something to justify their time in this cell. In other cases, the protagonist or their friend will have a case of Wrong Genre Savvy and act out the trope with the belief that there is Truth in Television. Either way, someone is going to get hurt.

If the guards don't notice any of this, then The Guards Must Be Crazy.