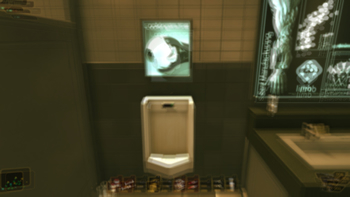 Feeling a little tipsy there, Jensen?
"Why is it that whenever they knock out the main character, they have to knock out the cameraman as well?"
— Graham Stark, Unskippable
Advertisement:

This is a camera trick used to indicate that the character whose POV we are seeing is drugged, poisoned, sick, injured, or otherwise incapacitated and is about to faint... or die. Frequently this shot precedes a Fade to Black that indicates the character has lost consciousness or an Iris Out as "everything goes black." Certain sound effects may enhance the effect: we hear the impaired character's heavy, labored breathing, for example, or his pounding heartbeat. Sounds may echo as the character gets closer to unconsciousness. Wavering horns, woodwinds, and/or strings can further simulate disorientation or drowsiness.

A subtrope of P.O.V. Cam. Common variations include:

A method of Painting the Medium. May involve Visual Compression.

After drinking some "Horse Medicine", Bob gets drunk and doesn't know what going on around him and he nearly blows his cover.

After drinking some "Horse Medicine", Bob gets drunk and doesn't know what going on around him and he nearly blows his cover.