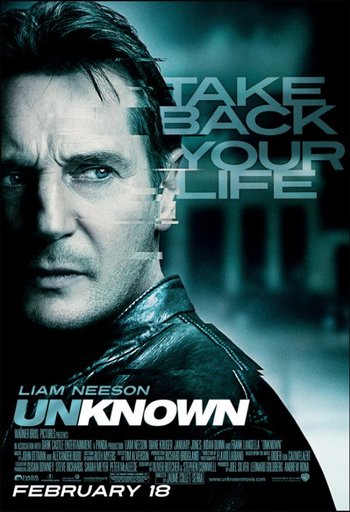 "Do you know what it feels like to become insane, doctor? It's like a war between being told who you are and knowing who you are. Which do you think wins?"
— Dr. Martin Harris
Advertisement:

Unknown is a conspiracy action-thriller film released in 2011 and starring Liam Neeson, directed by Jaume Collet-Serra. The film is based on the 2003 French novel Hors de moi, published in English as Out of My Head, by French author Didier Van Cauwelaert.

Neeson plays botanist Dr Martin Harris, who brings his wife along to attend a biotechnology conference in Berlin. However, he gets into a car accident while riding the taxi back to the airport to pick up luggage he left behind. When he awakes in hospital, he leaves to find his wife. However, Liz denies knowing who Martin is... and another man is wearing Martin's name tag and claiming to be him is standing right next to her - and she acknowledges "Martin B" as the real deal. In a foreign land for the first time, pursued by mysterious terrorists and with nobody to trust, Harris must get all the help he can find, including from Gina (Diane Kruger) the driver of the cab that plunged into the river and Jürgen (Bruno Ganz), a former Stasi agent-turned private investigator.

The film not only has a Twist Ending, it has twist beginnings, twist middles and twist three-quarters - hence the large amount of marked spoilers below.

Not to be confused with the 2006 James Caviezel movie.

"What matters is what you do now, Martin."