Film / The Beast with Five Fingers 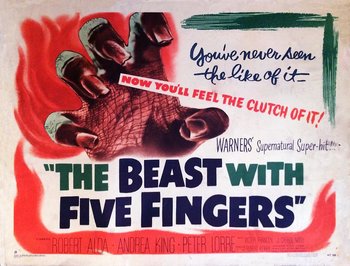 The Beast with Five Fingers is a 1946 mystery horror film directed by Robert Florey from a screenplay by Curt Siodmak, based on a short story written by W. F. Harvey and first published in 1919 in The New Decameron. The film stars Robert Alda, Victor Francen, Andrea King, and Peter Lorre. The film's score was composed by Max Steiner.

Locals in an Italian village believe evil has taken over the estate of a recently deceased pianist where several murders have taken place. The alleged killer: the pianist's severed hand.

Tropes in The Beast with Five Fingers: