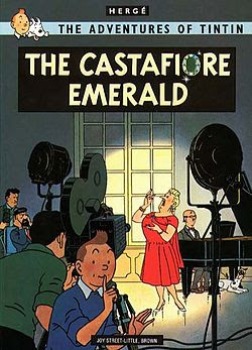 The Castafiore Emerald (1963) is the 21st adventure of Tintin, mostly taking place within the walls of Marlinspike Hall. The protagonists never leave their home in what is considered the most "sedate" tale in the series.

The tale begins with Captain Haddock encountering a camp of Roma setting up in a dump just downwind from Marlinspike Hall. Captain Haddock then generously lets them camp out on his own property, close to his house. This minor event is followed by the news that Bianca Castafiore, Italian opera diva and Abhorrent Admirer to Haddock, has decided to spend her vacation in the Hall. The Captain decides it's time to leave the hall for a vacation of his own. In his haste to leave, Haddock steps on a damaged staircase and sprains his ankle, ensuring that he is not going anywhere.

Castafiore's stay in the Hall turns out to be eventful. One of her prized emeralds goes missing and suspicions fall on the gypsies, while the press misinterprets a random comment of Calculus for an announcement that Bianca is marrying Haddock, resulting in coverage of the events by tabloids and television, along with congratulations from friends around the globe.

The Castafiore Emerald provides examples of: