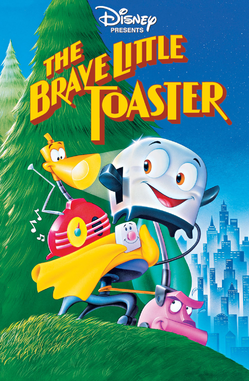 "Time flies by in the City of Light,
time stands still in the country!"
"Really, now. Where could I find another toaster like this?"
— Rob (Master)
Advertisement:

The Brave Little Toaster is an Animated Musical from 1987, based on a children's novella of the same name (with the subtitle A Fairy-Tale for Appliances) by Thomas M. Disch. It was directed by Jerry Rees and produced by Hyperion Pictures and Wang Film Productions (who also handled the animation), with Disney handling distribution.

The film centers on five household appliances — the eponymous Toaster, Lampy (a desk lamp), Kirby (a vacuum named for a vacuum company), Radio (a radio), and Blanky (an electric blanket) — who live in an old cabin out in the woods. The appliances have been left behind by their Master, a young boy, and have been waiting for him to return for years. When the cabin is put up for sale, the appliances determine to go find the Master (who, unknown to them, is now a young man getting ready for college) by making a journey to the city.

"I don't believe I've ever seen quite so many smiles before..."

"I don't believe I've ever seen quite so many smiles before..."