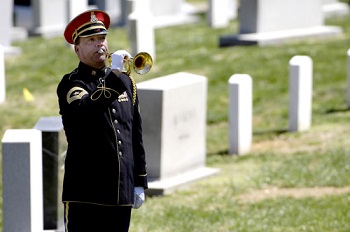 As the "Taps" article

on That Other Wiki states, "Taps" is a musical piece sounded at dusk, and at funerals, particularly by the U.S. military. It is sounded during flag ceremonies and funerals, on single bugle or trumpet, and often at Boy Scout, Girl Scout and Girl Guide meetings and camps.

The history of the tune (and its rarely-heard lyrics) is the mother of all tear-jerkers.

In fiction, "Taps" is usually used to mourn an honorable person, especially military characters, though in comedy it can be used for just about anyone. Often combined with a Moment of Silence, hats off. "Taps" can also mean a metaphorical death, like a death of one's hope. If a civilian has died, Amazing Freaking Grace is much more likely to be heard.

This is not the page for The Atlantic Paranormal Society (TAPS), or the film Taps.

A part of the Funeral Tropes. See also Standard Snippet. May be accompanied by a 21-Gun Salute.