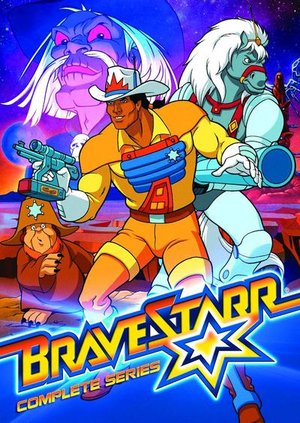 "It was the toughest of planets.
They needed a thousand lawmen.
They got one.
He was enough."
Advertisement:

BraveStarr was a Space Western action cartoon, produced by Filmation, which aired during that long acid trip we all know and love as The '80s. It aired in the wake of He-Man's success in 1987 and lasted one season.

As the Expository Theme Tune explains, sometime in The Future, the planet New Texas is experiencing Days of Future Past with settlers coming to the planet to mine its deposits of "Kerium", an energy-bearing variety of Green Rocks. Unfortunately, the planet has to deal with the threat of Tex Hex, a mystically empowered outlaw who, with his gang, tries to steal as much Kerium as he can, and will overpower anyone in his way.

To keep law and order on the planet, The Federation sends Marshall BraveStarr. BraveStarr, thanks to his upbringing by the Magical Native American Shaman, is able to use the powers of spirit animals to gain super powers: "Eyes Of The Hawk", "Ears Of The Wolf", "Strength Of The Bear", and "Speed Of The Puma". With these powers, and the help of Thirty-Thirty (his Cool Horse who can become a humanoid BFG-toting Sidekick when he's not BraveStarr's mount), BraveStarr keeps the peace for both the settlers and the native "Prairie People".

More details are available at Wikipedia

Eyes of the hawk! Ears of the wolf! Strength of the bear! Speed of the puma! List of the tropes!: