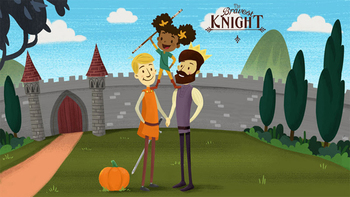 The series follows former pumpkin farmer Sir Cedric, now grown and married to Prince Andrew, the prince of his dreams, sharing with his 10-year-old adopted daughter Nia how he transformed from farmer to knight. Nia, training to become a knight herself, learns values such as honor, justice and compassion.

The Bravest Knight provides examples of: