Western Animation / Class of the Titans 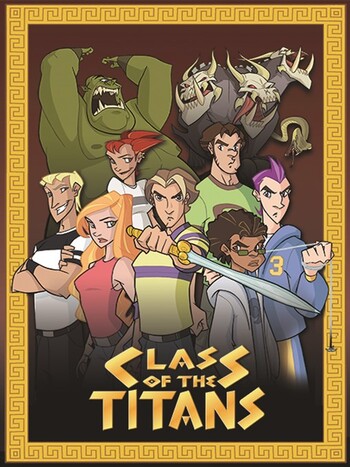 Class of the Titans is a Canadian animated television series themed around Classical Mythology and created by Chris Bartleman and Michael Lahay. It was produced between the Vancouver-based Studio B Productions and Toronto's world-famous Nelvana studio, as their second collaboration following Being Ian.

Thousands of years ago, Cronus, God of Time and leader of the Titans, was defeated by his son Zeus, king of the Olympians, and imprisoned in Tartarus. But in the present era, a prophecy has revealed that he will break free of his imprisonment at exactly midnight on New Year's Eve when all the planets of the Solar System come into perfect alignment, providing him with the power he needs in order to escape. Now loose in the modern world with an army of giants and monsters at his command, Cronus intends to exact his revenge against the Greek gods and Take Over the World.

While the gods of Mount Olympus no longer have the power to stop Cronus on their own, an oracle has foretold that Cronus will be defeated once and for all by seven teenagers descended from Greek mythology's greatest heroes. These chosen ones are gathered at Olympus High, a school that hides a secret entrance to a special training ground for them. There, they learn and undertake training under the guidance of the Olympians, honing their skills and working as a team in order to save the world from Cronus, as he unleashes some of Greek mythology's most famous monsters and villains against them.

The series debuted on Teletoon on December 31, 2005 as a three-part premiere special and proceeded to run for a total of 52 episodes in two seasons, with the finale airing on June 22, 2008. Stateside, the show was shown on Qubo. Episodes can currently be found on YouTube through Nelvana's Retro Rerun channel

. It also can be found on Tubi, Amazon Prime, and most other online streaming services where you can find Nelvana's library.