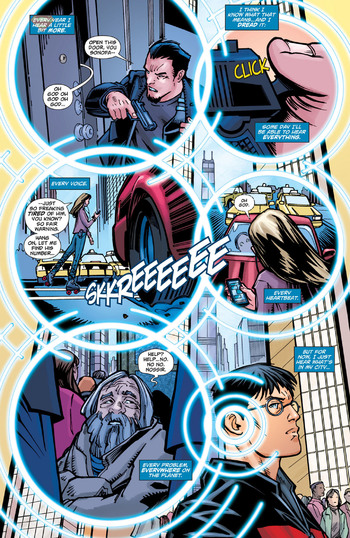 Guaranteed to be a good listener.
"I can hear an angel fart!"
— Sal Macelli, Innocent Blood
Advertisement:

The ability to hear anything audible that normal humans cannot. Pretty common to have for a character with Super Senses. It's quite useful for eavesdropping, although hopefully in context.

May be a form of Charles Atlas Superpower. A blind fighter or swordsmaster is likely to have this. Also frequently the power used by the Living Lie-Detector. A character with sound powers may also have this either innately or through training, frequently as a form of echolocation.

This power is widespread among werewolves and other werebeasts. Or at Animal-Themed Superbeings. Vampires often have a keen sense of hearing right after Night Vision.

Very prone to Sensory Overload, whether deliberate or unintentional, since loud noises are a Logical Weakness. Unless the user has the Required Secondary Powers of adjusting their hearing or filtering out ambient sound, they're very much Blessed with Suck.

Sub-Trope of Super Senses and Sister Trope to The Nose Knows.

Being a vampire, Mavis has super senses.

Being a vampire, Mavis has super senses.