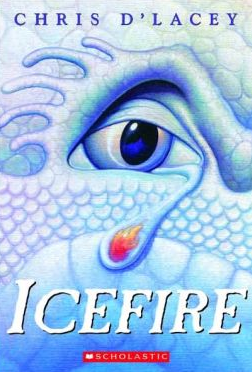 The Last Dragon Chronicles is a group of bestselling children's fantasy novels by the English author Chris d'Lacey. The series began in 2001, and is still going. As of this writing, there are seven main books in the series, plus a spinoff series for young readers.

The series begins when David, an Ordinary College Student, starts looking for a place to stay during his term. He finds a woman named Elizabeth "Liz" Pennykettle, who is renting out part of her house on a street called Wayward Crescent. David moves in with her and her ten-year-old daughter, Lucy. Liz is an artist — she makes clay dragons, and even gives David a dragon of his own, whom he names Gadzooks. As David settles into life with the Pennykettles, he starts noticing strange things — movement in the corner of his eye here, the feeling of being watched there, and odd noises everywhere. Through his adventures with Lucy, he soon realizes that there is more to the Pennykettles than there seems. Some of the dragons they make are just statuary, but some of them are alive. David refuses to believe this at first - but his sudden inspiration to write stories, and Gadzooks' own pen and paper, soon force him into believing that there is more to Wayward Crescent than meets the eye.

David is soon dragged deep into the secret history and world of dragons. Liz and Lucy are among the last protectors of the world's dragons — descendants of Guinivere, a maiden who befriended the last "true" dragon. Dragons aren't the big beasts they once were — now, they must take clay bodies. But they still have dragon's sparks, deep down. And David and the Pennykettles must protect them from all who would do them harm!