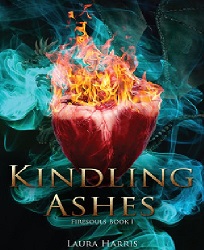 Sixteen years ago, the strongest of the dragons who once flew free over the kingdom of Auland escaped extinction the only way they knew how; releasing their souls to reside in unaware humans. With a debilitating sickness spreading through their hosts, time is running out for them once more…

On the streets of the capital city, a teenage gold smuggler named Giselle struggles to survive with the help of the Voice inside her head. Her world is turned upside down when she catches an opportunity to travel to the mountains just as she has always dreamed, but there is a price to pay which she cannot avoid.

Far south in the country, Corran is the youngest son of the dragonslayer who led the battle all those years ago. He clashes with his brothers daily in a battle to prove himself and when he hears of dragon sympathisers nearby he is determined to turn it to his advantage - but these ‘Firesouls’ have news that will change his life.

Two souls cannot live in one body forever. The hibernation is over.