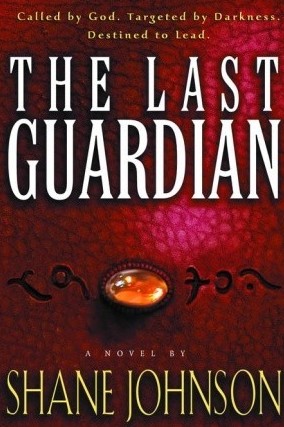 The Last Guardian (2001 novel) was written by Shane Johnson.

T.G. Shass was an ordinary college student in 1975, until a mysterious leather-wrapped object appeared before him on a nature hike. He took it, and was transported to the fantastic world of Noron. A world where dinosaurs live, most people are ten-foot giants, of high technology and countless wonders.

A world thoroughly lost, where every manner of sin and depravity is commonplace, routine.

T.G discovers that the mysterious object is, in fact, the last surviving copy of Noron's scripture. He himself has been chosen as Dovo Kosi, the Voice in the Darkness. The Last Guardian of this holy text, and the last prophet sent to try and spare the people of Noron the coming judgement. In and around his few trips home, separated by decades, and searching for his missing sister who might just have also been whisked away to this world.

So, a Christian novel wrapped up in high fantasy trappings.

Tropes appearing in The Last Guardian: