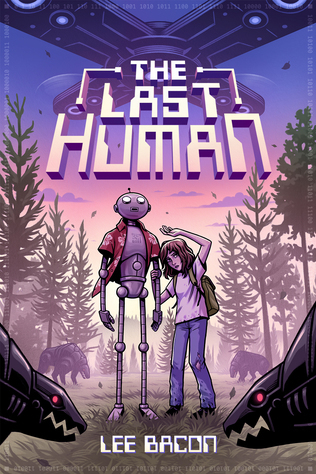 The Last Human is a Science Fiction Children's-to-Middle Schooler's novel by Lee Bacon.

In the future, the world is ruled by robots. When they deduced humans to be the greatest threat to Earth's safety, they rose up and wiped them out 30 years ago. Now robots rule over the planet Earth, and have created a civilization where everything is run smoothly, everyone has a purpose, and there's no war, pollution, or poverty.

This is the world that XR_935 was built into. Since his activation, all he has known are that humans basically poisoned their land, fought each other in damaging wars, and didn't care one lick for the world, the other lifeforms living on it, or even for each other. All this he knows courtesy of the daily Presidential Address that the society's leader, PRES1DENT, beams into all the robots' brains daily via the robot Hive-Mind through which they are all linked.

Then, one day, while at work, XR_935 and his co-workers, Ceeron_902 and SkD, make a shocking discovery. They find a young human girl named Emma hiding in their solar panel field. XR's first inclination is to tag her and leave her to the HunterBots. However, she manages to convince him to let her live, and hide. Emma tells the robo-trio that she's the Sole Survivor of a disease that wiped out all the other humans in her bunker, and that her parents gave her a map with a special location pointed out on it, telling her to go there.

XR_935, Ceeron, and SkD realize two things. One, that this human doesn't seem anywhere near as dangerous and malicious as PRES1DENT's daily addresses say, and two, she needs their help to get to her destination in one piece. So, for the first time in their existence, the three robots break from their daily routine, and leave work to help this girl reach her destination.

The Last Human contains examples of: