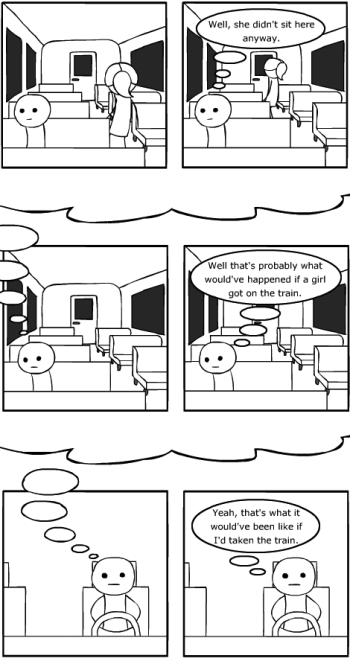 And that's just one part of it.
Ted: I think I'm gonna head home.
Barney: I understand.
Ted: What, you're not gonna try and stop me?
Barney: And how would I try and stop you?
Ted: I don't know, by telling me life is short and if you ever come across a beautiful, exciting, crazy moment in it you gotta seize it while you can before that moment's gone?
Barney: Ted, this moment already is gone. The whole Minnesota Tidal Wave thing happened five years ago. It's just a memory. And the rest of this? Never happened. Right now, Lily and Marshall are upstairs, trying to get Marvin to go back to sleep. Robin and I are trying to decide on a caterer. And you've been sitting here all night, staring at a single ticket to Robots vs. Wrestlers because the rest of us couldn't come out. Look around, Ted. You're all alone.
— How I Met Your Mother, "The Time Travelers"
Advertisement:

For the last two hours, we've been following the adventures of the brave Princess Alice in the magical kingdom of Marvellonia, but then the story suddenly cuts to a living room in a modern house... And we find out Alice is just a regular kid living in the suburbs, while the movie we just saw is actually a story told by Alice to her friends to spice up a boring Saturday evening.

Nested Story Reveal is a Sub-Trope of Nested Story where the audience thinks they are witnessing "real" events (real within the fictional universe, that is), but later on these events are revealed to be a piece of fiction within an outer story that frames the inner nested story. Normally this is done by starting the plot with the inner story and not revealing the Framing Device until later on.

The inner story doesn't have to be a literal story, it can also be a computer simulation, a role-playing game, a Show Within a Show, etc. What makes it a Nested Story Reveal is that the audience is lead to believe the events are "real", but the character(s) in the outer story know they are fiction, and this is revealed to the audience when the plot moves from the inner story to the outer one.

For a work to qualify as an example of Nested Story Reveal, it needs to tell a full story, or at least a large chunk of it, before switching to the Framing Device. Fake-Out Opening is a subtrope where the switch comes after only one scene. If the reveal doesn't happen in the work itself, but in one of its sequels, or in another work set in the same universe, we're dealing with Recursive Canon. If the plot starts with a framing device where a character is telling a supposedly true story, but later on the story is revealed to be (at least partially) fictional, it's a case of an Unreliable Narrator. A Proscenium Reveal is sometimes used to reveal the nested story.

Sometimes, after the inner story has been revealed to be fictional, the framing story may hint that there was some truth to it after all. Perhaps the inner story was an embellished version of something that really happened?

Like with All Just a Dream, a Nested Story Reveal can make the audience feel cheated, when the story they've been following turns out not to be "real". A metafictionally oriented work may point out that the nested story is no less real than the framing story: they're both still fiction, only on different levels of the overall plot.

Note: This is a Spoilered Rotten trope, which means that every single example on this list is a spoiler by default. Since Nested Story Reveal is often used as an ending trope, merely seeing a work's name mentioned here can spoil its plot.