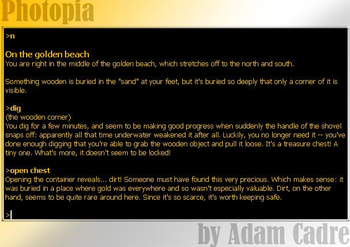 First you're a bombed-out guy in a car with a friend. Next you're an astronaut on Mars on a mission. Then you hear a splash. Then the narrator and plot shift again to match with the color of the times...
Advertisement:

Such is the nature of Adam Cadre's Photopia, a 1998 Interactive Fiction work unique in the execution of its narrative and gameplay elements. While relatively brief and puzzle-light compared to many other Interactive Fiction, it uses that time to give you pieces of a large picture that gradually fills in as the game progresses. And when the pieces finally click together... let's just say that there's a reason for the game placing 1st place in its year's Interactive Fiction competition.

In the history of Interactive Fiction, Photopia marked a Genre Turning Point; before Photopia, games often used Mind Screw surrealism or High Fantasy loosely bound by a huge Story Arc. After Photopia, plot and puzzles became more important to the feel of a game, and slice-of-life realism overtook surrealism as the most popular environment in Interactive Fiction.

. Cadre has dropped hints of an in-progress movie adaptation.