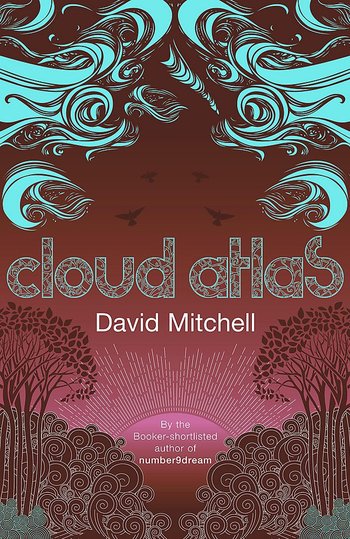 "What is any ocean but a multitude of drops?"
“Souls cross ages like clouds cross skies, an’ tho’ a cloud’s shape nor hue nor size don’t stay the same, it’s still a cloud an’ so is a soul. Who can say where the cloud’s blowed from or who the soul’ll be ’morrow? Only Sonmi the east an’ the west an’ the compass an’ the atlas, yay, only the atlas o’ clouds.”
— Zachry
Advertisement:

The third novel by David Mitchell (no, not that one), Cloud Atlas is a sweeping epic that connects wildly different genres and writing styles into a single narrative. The novel consists of six nested stories, each set in a different place and era, moving forwards in time from the 19th century all the way to the future. Each story and style is a pastiche of the most recognisable examples of the genre (which the characters swiftly realise and comment on), and lovingly combines old clichés with new twists. A comet-shaped birthmark appears in each story, generally on the protagonist, and the characters often recognize names, places, and experiences from other stories. In order of introduction, the six stories are:

Instead of being completely sequential, each of the first five stories ends halfway through, sometimes on a cliffhanger, once in mid-sentence. The sixth and central story is the only one presented in one go — afterwards, each of the other five resumes in reverse order, taking the reader back to the beginning (notably, there are also in-universe explanations for the stories resuming, with the protagonist of each story finally getting around to reading/watching the later half of the chronogically preceding story). This mirrored pattern can be found throughout the novel in other things: most prominently, in the Cloud Atlas Sextet, the tangled musical piece that Robert Frobisher feverishly composes.

The film version — which is a gorgeous Pragmatic Adaptation, with some of the storylines significantly altered — is written and directed by Tom Tykwer, the director of Run Lola Run and Perfume, and The Wachowskis. The All-Star Cast includes Tom Hanks, Halle Berry, Keith David, Hugo Weaving, Susan Sarandon, Hugh Grant, Ben Whishaw and many others. It was released in October 2012.