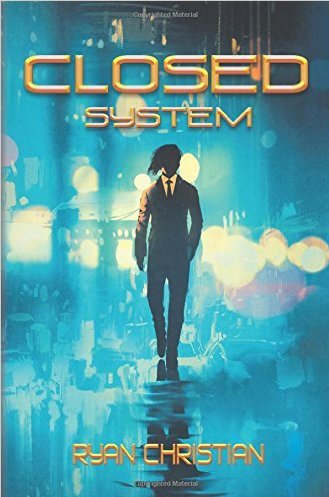 Closed System is a 2016 Cyberpunk Romance novella written by Ryan Christian and published by Xlibris.

The plot revolves around a jaded call center agent named Eric who has had enough of his hedonistic society and has become numb to just about everything. Told from the first person perspective, the story progresses through Eric's daily life transitioning from quiet, all-work days to city-wide raves at night (which he tries desperately to avoid).

While leaving a party Eric happens upon Badass girl Claire, who lives in the Under City where nobody ever goes. Becoming involved with Claire leads Eric to her Retired Badass "Grandpa" and an underground culture outside of the city's Big Brother computer systems. Everything goes great until La Résistance decides to attack the establishment and bring down martial law, putting Eric and Claire smack in the middle of the conflict.

Eric and Claire have to deal with brutal police, insane drug dealers, resistance recruitment efforts, and annoying siblings while all of this is going on.